Sulawesi – formerly known as Celebes, is an island in Indonesia. One of the four Greater Sunda Islands, and the world’s eleventh-largest island, it is situated between Borneo and the Maluku Islands. 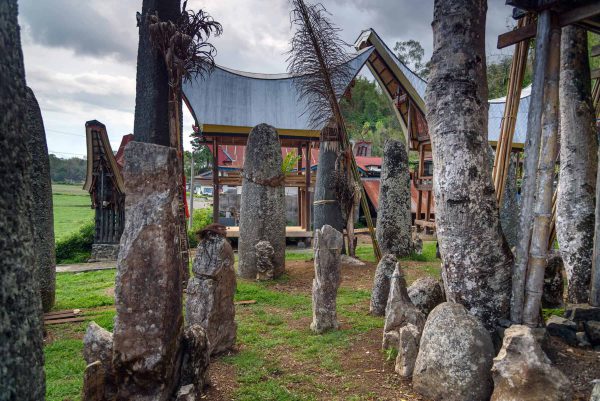 Within Indonesia, only Sumatra, Borneo and Papua are larger by territory, and only Java and Sumatra have larger populations. The name Sulawesi possibly comes from the words sula “island” and besi “iron” and may refer to the historical export of iron from the rich Lake Matano iron deposits.

This enormous island has much to offer the visitor from extraordinary unique cultures, to an under-explored mountainous hinterland, and several truly world class diving spots. In Central Sulawesi, there are over 400 granite megaliths, which various archaeological studies have dated to be from 3000 BC to 1300 AD.

Makassar – is the provincial capital of South Sulawesi. It is the largest city on Sulawesi Island in terms of population, and the fifth largest city in Indonesia after Jakarta, Surabaya, Bandung, and Medan. From 1971 to 1999, the city was named Ujung Pandang, after a precolonial fort in the city, and the two names are often used interchangeably. 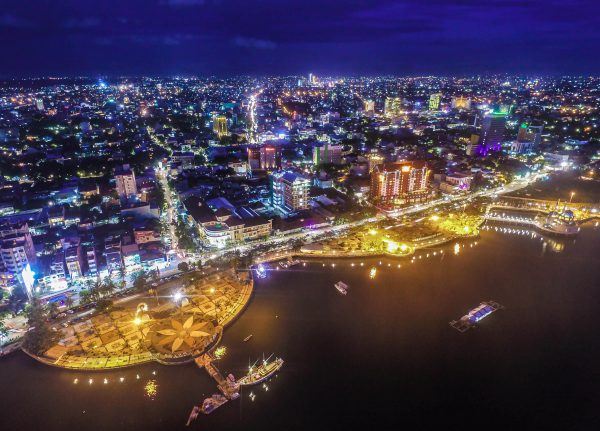 The city is located on the southwest coast of the island of Sulawesi, facing the Makassar Strait. As South Sulawesi is dominated by the Bugis, the local language in Makassar is Buginese. The city is the main entry point for tourists who want to explore the lands of Tana Toraja but it has a lot to offer itself.

Inside its 17th-century Dutch colonial Fort Rotterdam is the Museum Negeri La Galigo, housing local exhibits. A promenade along Losari Beach is known for its seafood restaurants. Traditional pinisi sailing ships pack the harbour of Pelabuhan Paotere. Offshore, snorkeling is possible on the coral reefs of Samalona Island.

Tana Toraja – is a regency of South Sulawesi Province of Indonesia, and home to the Toraja ethnic group. The local government seat is in Makale, while the centre of Toraja culture is in Rantepao. The Tana Toraja boundary was determined by the Dutch East Indies government in 1909. 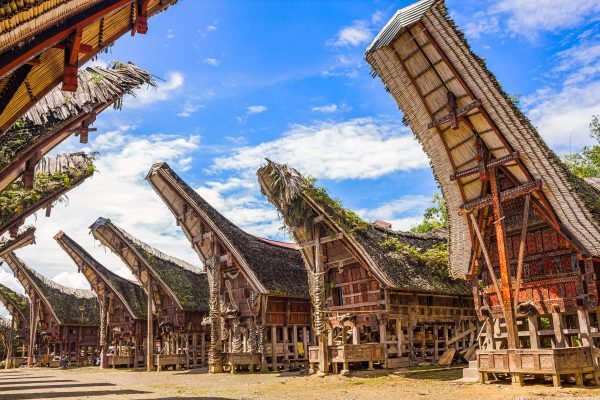 In 1926, Tana Toraja was under the administration of Bugis state, Luwu. In 1957 it was recognized as one of the regencies of Indonesia. When Indonesian Ministry of Tourism named Tana Toraja the second tourist destination after Bali in 1984, tourism was increasing dramatically. Since then, hundreds of thousands of foreign visitors have visited this regency. In addition, numerous Western anthropologists have come to Tana Toraja to study the indigenous culture and people of Toraja.

Traditional Tongkonan houses stand proudly in this setting. These intricately decorated houses with upward-sloping roofs are the centre of all Aluktodolo rites. From storing the harvests in the carved rice barns – alang – to slaughtering sacred water buffaloes at a week or more funeral ceremonies.

Tana Toraja’s beauty is also reflected in its people. They combine religious beliefs with magic and mysticism, and welcome visitors to witness their ceremonies. Tana Toraja is a sleepy rural region cultivating rice, cacao, coffee, and clove most of the year. Toraja’s Arabica Coffee carries a high reputation and is something that visitors may be interested in trying.

Lemo – is a village located about 11 kilometres south of Rantepao and 7 kilometres north from Makale, in the heart of Tana Toraja. 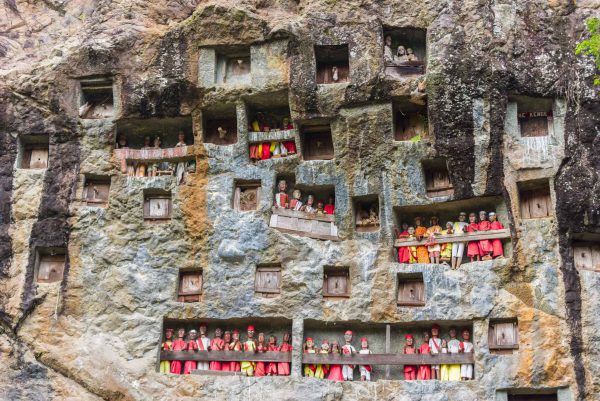 The name Lemo means lemon and comes from of the shape of the hills near the village. It is the best-known ancient burial area in the region.

The sheer rock face has a whole series of balconies for tau tau (effigies of deceased). According to local legend, these graves are for descendants of a Toraja chief who built his house on top of the cliff into which the graves are now cut.

Londa – is a village about 6 kilometres south of Rantepao and one of the most popular tourist destinations in the Tana Toraja region. 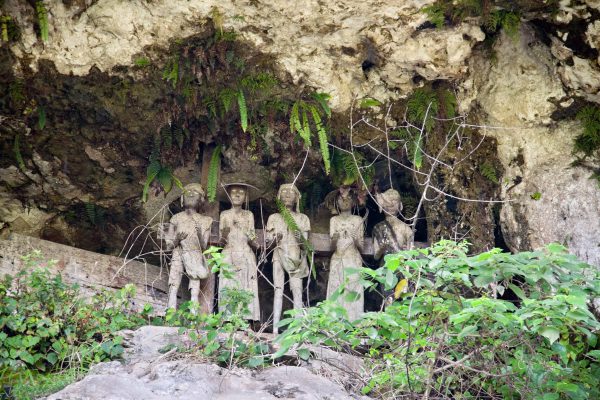 The biggest attraction here is undoubtedly the cave graves. The caves are filled with decorated coffins, around which the skulls and bones of the tribe of Toraja are lying either scattered or heaped in piles. The higher the status of the deceased, the higher is the coffin chamber.

The highest ones are 50 meters high, while coffins of the lowest social class are found in caves and crevices at the foot of the cliff. According to the local legend, Londa is the burial place of Tangdilinoq, the leader of the Toraja people.

Kete Kesu – is a village located in the mountainous region of Tana Toraja, about 5km south of Rantepao. Kete Kesu can get busy with tour groups in high season. The village is the cultural cradle of the Toraja ethnic group inhabiting it. 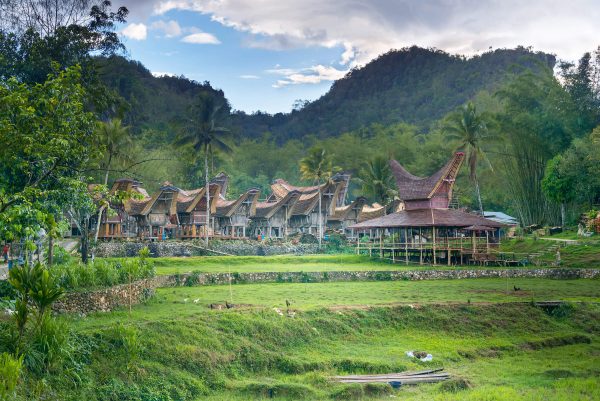 Surrounded by extensive rice fields, Kete Kesu is the oldest village in the Sanggalangi region and is over 400 years old. The village is renowned for its woodcarving and traditional tongkonan houses and rice barns. On the stone cliff behind the village, there are some cave graves and very old hanging graves. Rotting coffins are suspended on wooden beams under an overhang.

The village is untouched by modern civilization and practically has not changed since the beginning of its existence. Today, Kete Kesu functions as a living museum where you can experience the culture and ancient traditions of the Toraja people.

Tempe Lake – is the largest island’s lake located in Wajo Regency in South Sulawesi. The lake is fringed by wetlands with magnificent birdlife. 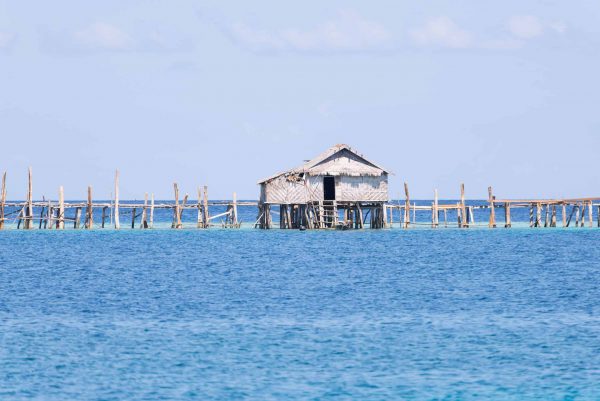 Geologists believe the lake was once a gulf between southern Toraja and the rest of South Sulawesi. As the lands merged, the gulf disappeared, so the lake may eventually disappear too.

Geologists believe the lake was once a gulf between southern Toraja and the rest of South Sulawesi. As the lands merged, the gulf disappeared, so the lake may eventually disappear too.

Tempe Lake – is the largest island’s lake located in Wajo Regency in South Sulawesi. The lake is fringed by wetlands with magnificent birdlife. From the Sengkang village, situated to the east of the lake a boat ride can be arranged to Salotangah village in the middle of the lake. 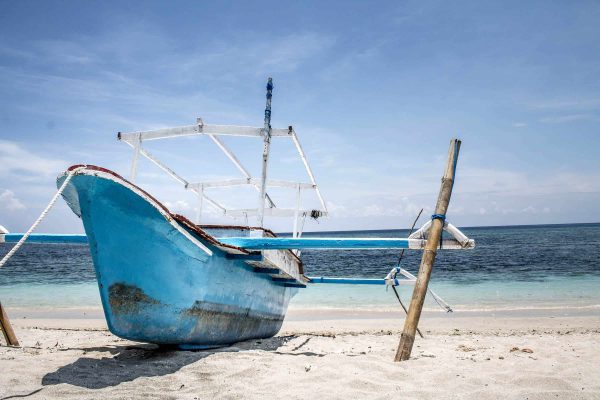 The settlement consists of floating wooden houses that don’t have any foothold in the bottom of the lake so they are always spinning blown by the wind. Geologists believe the lake was once a gulf between southern Toraja and the rest of South Sulawesi. As the lands merged, the gulf disappeared, so the lake may eventually disappear too.