Lombok – is an island in West Nusa Tenggara province. It forms part of the chain of the Lesser Sunda Islands, with the Lombok Strait separating it from Bali to the west and the Alas Strait between Sumbawa to the east. 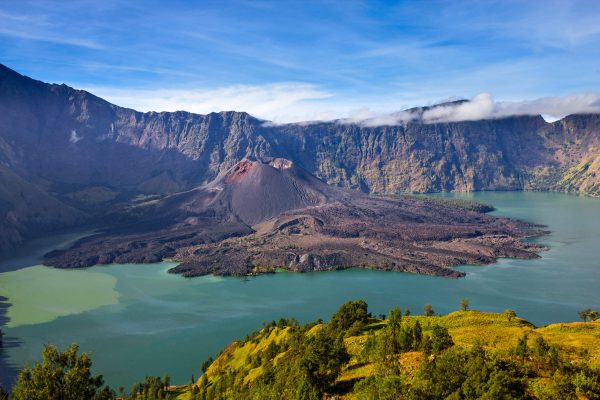 It is roughly circular, with a "tail" (Sekotong Peninsula) to the southwest. The provincial capital and the largest city on the island is Mataram.

It is somewhat similar in size and density with neighbouring Bali and shares some cultural heritage but is administratively part of Nusa Tenggara Barat along with sparsely populated Sumbawa. It is surrounded by a number of smaller islands locally called Gili.

The island’s inhabitants are mainly Sasak, who probably migrated from Java in the first millennium BC. With beautiful beaches, enchanting waterfalls, the large, looming volcano of Mount Rinjani combined with relatively few tourists, Lombok is indeed the paradisiac tropical island.

Mount Rinjani – is an active volcano located on the island of Lombok. The last eruption of the volcano took place in September 2016. Administratively the mountain is in the Regency of North Lombok, West Nusa Tenggara. It rises to 3,726 meters, making it the second highest volcano in Indonesia.

It is thought that the name Rinjani comes from an old Javanese term for “God”. On the top of the volcano is a 6-by-8.5-kilometer caldera, which is filled partially by the crater lake known as Segara Anak or Anak Laut (Child of the Sea), due to the colour of its water, as blue as the sea (Indonesian: laut).

This lake is approximately 2,000 meters above sea level and estimated to be about 200 meters deep. The caldera also contains hot springs. Sasak tribe and Hindu people believe the lake and the mount are sacred and some religious activities are occasionally done in the two areas. A climb to the top is one of the most exhilarating experiences you can have in Indonesia.

Rinjani National Park – is located on the island of Lombok, in the North Lombok Regency. The park covers about 41,330 hectares and consists of mountainous areas. 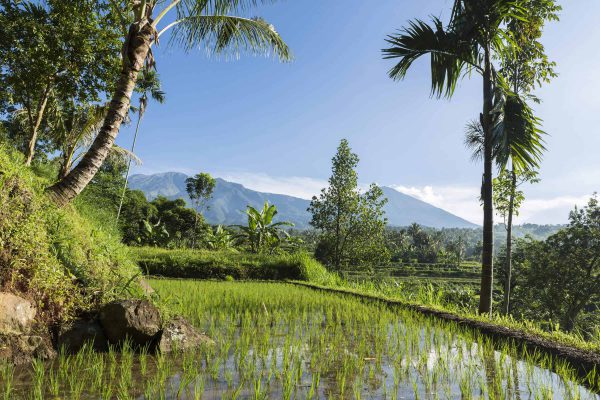 Mount Rinjani (Gunung Rinjani), which is the third highest mountain in Indonesia at 3,726 meters, is located in this national park, giving this park its name.

The National Park represents a range of Nusa Tenggara’s ecosystem types, from submontane rain forest to montane forest and savanna. From a wide range of endangered species living in the park, one species is endemic, namely a civet musang rinjani (Paradoxurus hemaproditus rinjanicus) related to ferrets.