Yogyakarta (also Jogja or Jogjakarta) – is the capital of the Yogyakarta Special Region and the former capital of Indonesia during the Indonesian National Revolution from 1945 to 1949. 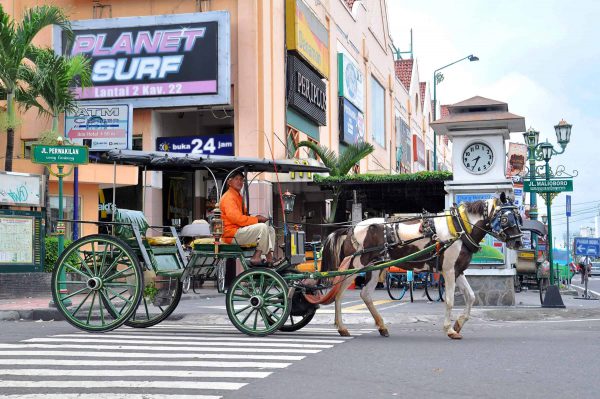 City’s building Gedung Agung (one of the present presidential palaces) was the president’s office. One of the districts in Yogyakarta, Kotagede, was the capital of the Mataram Sultanate between 1575 and 1640. The city is named after the Indian city of Ayodhya from the Ramayana epic.

Yogya means “suitable, fit, proper”, and karta, “prosperous, flourishing” (i.e., “a city that is fit to prosper”). It is renowned as a centre of education (Kota Pelajar), culture, and classical Javanese fine arts, such as batik, wayang kulit puppet theatre, ballet, drama, music, and poetry.

Keraton of Yogyakarta / Sultan Palace – formally known as Keraton Ngayogyakarta Hadiningrat is a palace complex located in the city of Yogyakarta. 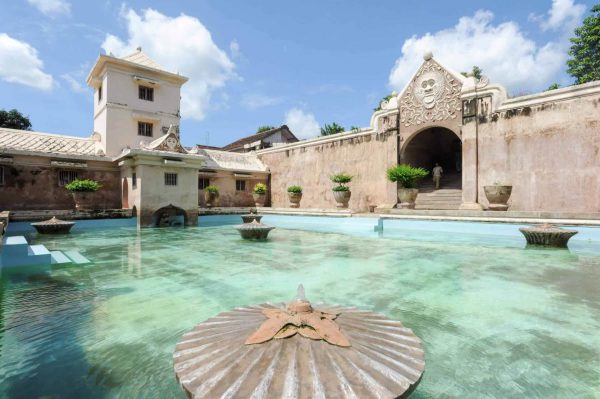 The palace was built by Prince Mangkubumi in 1755–1756, according to Javanese Philosophy and its mysticism. The spatial arrangement of the palace, including the cityscape of the old city of Yogyakarta, its architecture, the direction of buildings, and objects are consistent with the mythological values and belief system of the Javanese.

The palace is the main seat of Sultan of Yogyakarta and his family. It serves as a cultural centre for the Javanese people and houses a museum that exhibits the sultanate’s artefacts.

Taman Sari Water Castle – is a complex of royal gardens built between 1758 and 1765 and situated just southwest of the Keraton of Yogyakarta. The castle once served as a splendid pleasure park of pools and waterways, meditation area or hiding place for the sultan and his entourage.

The name Taman Sari derives from the Javanese words taman, “garden” or “park” and sari “beautiful” or “flowers”. It is said that the sultan owes the project of the retreat to a Portuguese architect-castaway, whom he ordered to execute, to keep his hidden pleasure chambers secret.

The complex was damaged during the Java War and almost entirely destroyed by the earthquake in 1865. While much of what remained is a ruin, the bathing pools have been restored, and the tunnels and underground mosque are still impressive. Since 1995 the Yogyakarta Palace Complex including Taman Sari is listed as a tentative to UNESCO World Heritage Site.

Malioboro Street – is a major shopping street in Yogyakarta. The name is also used more generally for the neighbourhood around the street. It is located north-south axis in the line between Yogyakarta Keraton and Mount Merapi. 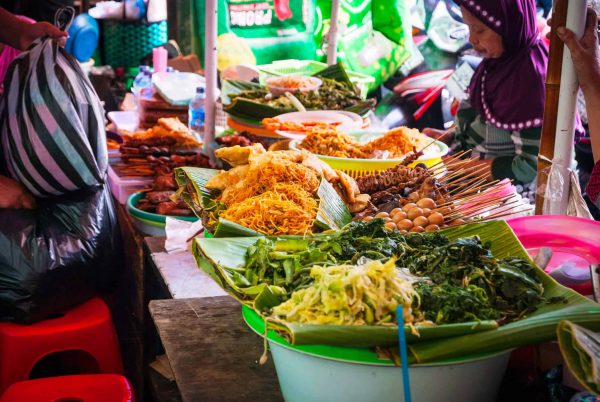 The north-south orientation between the palace and the volcano is not accidental and derives from Javanese philosophy. The street is the centre of Yogyakarta’s largest tourist district surrounded by many hotels, restaurants, and shops.

In the evening, several open-air street-side restaurants, called lesehan, operate along the street. This is the street of the artists. Street musicians, painters, and other artists exhibit their creations on this road.

Less obvious to the tourist, but more for the local population, side streets, lanes, and structures that lead on to Malioboro are as important and fascinating as the street itself.

Beringharjo Market (Pasar Beringharjo) – is the most famous and the biggest traditional market in Yogyakarta, situated 800 m north of the Keraton, on Malioboro Street. The main building was constructed in 1925 in a place once overgrown with banyan woods. In Indonesian beringin means “banyan tree” and hence derives its name. 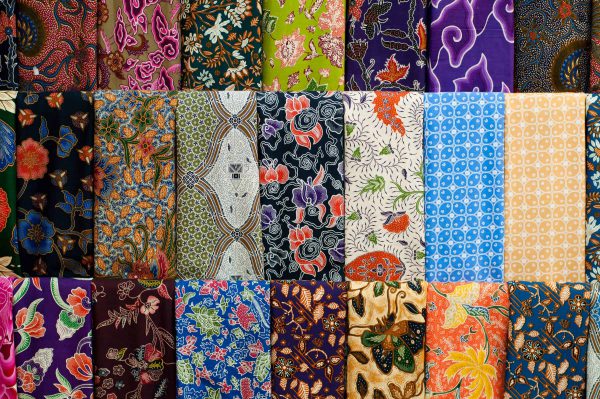 The market is a lively and fascinating place willingly visited by the tourists. The front section has a wide range of batik fabrics and clothes, from inexpensive batik cap (“stamped batik”) to richly decorated hand-painted pieces of art.

More interesting is the old section towards the back. Crammed with warungs and stalls selling a huge variety of fruit and vegetables, this is still very much a traditional market. The range of rempah rempah (“spices”) on the 1st floor is outstanding

The 3rd floor is filled with all kinds of antiques, from old furniture, home decorations to various trinkets from the past; some treasures might be very valuable. It is worth to visit the place in early in the morning to feel the vibe of a real busy market.

Kota Gede – in Javanese means “big city”, now an upmarket suburb of Yogyakarta, has been the hub of the local silver industry since the 1930s, but it was once the first capital of the Mataram kingdom, founded by Panembahan Senopati in 1582. 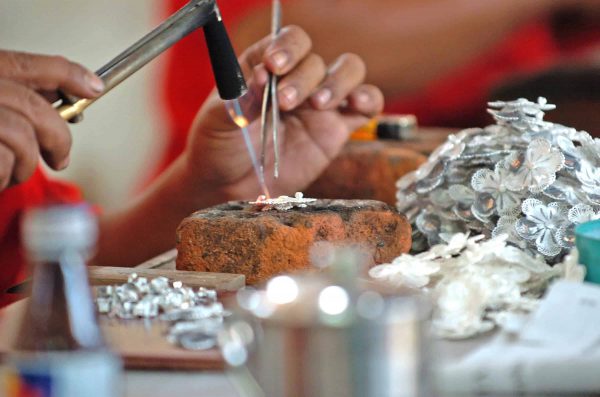 Senopati is buried in the small graveyard of an old mosque located to the south of the town’s central market. You can visit the sacred tomb, but be sure to wear decent clothes when visiting.

Borobudur Temple – is a Mahayana Buddhist temple located in Magelang, Central Java. Borobudur is the world’s largest Buddhist temple. Its origin is dated to the 9th-century but it was abandoned following the 14th-century decline of Hindu kingdoms in Java. The temple remained undiscovered for centuries, covered with earth, volcanic ashes and overgrown with dense jungle.

The whole complex was fully unearthed in 1835. Beautifully situated between verdant rice fields, green hills, and an active volcano, this colossal Buddhist relic is one of Southeast Asia’s marvels, inscribed on the World Heritage List.

It has survived Merapi volcano’s eruptions, terrorist bombs and millions of tourists passing through its platforms to remain as enigmatic and beautiful as it must have been 1200 years ago. Borobudur is built from two million stone blocks in the form of a massive symmetrical stupa on square 118 m x 118 m base.

Six square platforms are topped by three circular ones, with four stairways leading up through finely carved gateways to the top. The temple’s exterior is just bare grey stone but it is believed that in the distant past it was covered with colour to catch the sun.

Candirejo Village – is a village located in the district of Borobudur, about 5 km from the famous temples. The place is described as the symbol of authentic Javanese culture. Visitors wanting to experience the traditional Javanese lifestyle will be satisfied. 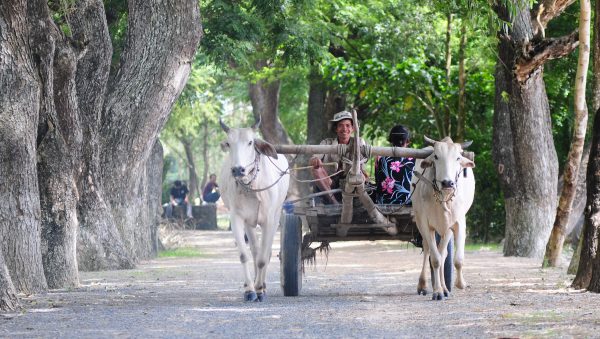 The village is very faithful to the purity and harmony of Javanese philosophy of life. And indeed the place is best known for how it has maintained the authenticity of ancient traditions and indigenous customs. The villagers still use horse-drawn carts, known as dokar, as the main meaning of transport.

Visitors can participate in a variety of cultural attractions and activities such as making cassava crackers or playing gamelan (traditional music instruments). The volcanic soil of the region is very fertile, the name Candirejo comes from old Javanese candi “stone, rock” and rejo “fertile”.

Natural conditions and the warm humid climate are perfect for rice cultivation. The lush verdant terraced rice fields are also an attraction for the visitors. Here you can learn about the rotating seasonal plantations and the harvesting and drying of chilli.

You can also learn how to climb the coconut tree, afterwards taking a refreshing drink from a young coconut.

Prambanan Temple – is a huge complex erected in the middle of the 9th century – around 50 years later than Borobudur – but little is known about its early history. It is thought that it was built by Rakai Pikatan to commemorate the return of a Hindu dynasty to sole power in Java.

Prambanan was in ruins for years, and while efforts were made in 1885 to clear the site, it was not until 1937 when reconstruction was first attempted. From the original number of 240 temples, only 8 main and 8 small shrines are reconstructed.

The majority of them have deteriorated and only scattered stones left. Eight minor and eight main temples stand in the highest central courtyard. Candi Shiva Mahadeva, a temple dedicated to Shiva, is not only the largest of the temples but also the finest. Thankfully, after years of restoration, the temple’s interior is accessible again to visitors.

The main chamber at the top of the eastern stairway has a four-armed statue of Shiva the Destroyer. It is notable for the fact that this mightiest of Hindu gods stands on a huge lotus pedestal, a symbol of Buddhism. In the southern cell is the pot-bellied and bearded Agastya, an incarnation of Shiva as the divine teacher; in the western cell is a superb image of the elephant-headed Ganesha, Shiva’s son, the god of knowledge. His right hand, usually holding his ivory tusk, was broken off in the earthquake. In the northern cell, Durga, Shiva’s consort, can be seen killing the demon Mahisha.

Some people believe that the Durga image is actually an image of the Slender Virgin, who, legend has it, was turned to stone by a man she refused to marry. She is still an object of pilgrimage and her name is often used for the temple group.

Bromo Mountain – is an active volcano and part of the Tengger massif, in East Java. At 2,329 meters it is not the highest peak of the massif but is the most well-known. The massif area is one of the most visited tourist attractions in East Java, Indonesia.

The volcano belongs to the Bromo Tengger Semeru National Park. The name of Bromo derived from Javanese pronunciation of Brahma, the Hindu creator god. Mount Bromo sits in the middle of a plain called the “Sea of Sand” (Javanese: Segara Wedi or Indonesian: Lautan Pasir), a protected nature reserve since 1919.

The typical way to visit Mount Bromo is from the nearby mountain village of Cemoro Lawang. From there it is possible to walk to the volcano in about 45 minutes, but it is also possible to take an organized jeep tour, which usually includes a stop at the viewpoint on Mount Penanjakan (2,770 m) (Indonesian: Gunung Penanjakan).

The viewpoint on Mount Penanjakan can also be reached on foot in about two hours.