Homepage Blog Why is it worth visiting Indonesia? – general information

Why is it worth visiting Indonesia? – general informationMarch 29, 2018

Indonesia is a very unusual place. First of all it consists of 17 500 islands,  a sensation on a global scale, secondly its geographical location makes Indonesia one of the most diverse countries in the world. It has 6 000 kilometers wide. Apart from deserts every single area is within reach. High mountains, active volcanoes, breathtaking valleys, dense jungle, numerous waterfalls, huge lakes, wild rivers and spectacular beaches; everything you can only imagine. Indonesia is also a home for many endangered species of animals living in their natural environment: orangutans, elephants, Sumatran tigers, rhinos or birds of paradise. Wild nature or location are not the only factors that make Indonesia so attractive for tourists. Within that country live many unique, native tribes with very remarkable traditions and rites. Indonesia is a mixture of cultures and religions. Every single island of that miraculous country  differs, each attracts and enchants by offering various attractions, owns various flora and fauna, other traditions, cultures, rites. Travelling around separate islands visitors can feel as if they were in separate countries.

Sumatra is the western-most island in the Indonesian archipelago, mainly Muslim. In the province Aceh can be found both enormous volcanos and rain forests. Gurung Leuser National Park is one of the last places in the world where you can see critically endangered orangutans in their natural environment. Spectacular Toba lake is located around six hours drive south from Medan. It is worth seeing because of its immense size. It is a large natural lake occupying the caldera of supervolcano. Moreover, the lake area is inhabited by very interesting ethnic groups such as Batak. They live in rich ornamented boat-shaped houses. Batak claim themselves to be Christians either Catholic or Protestant but they have combined their religion with indigenous religious beliefs. Religious syncretism is widely spread around. The most commonly known cities are Bukittinggi and Padang. Bukittingi is believed to be one of the most beautiful Sumatran towns, surrounded by three volcanoes. One of them, Marapi, is an active one, but can still be climbed. Padang is a starting place to Mentawai Islands. First of all, it is an ideal place for surfers, big waves and good weather conditions make it more than perfect. Siberut Island is a home for Mentawai people, native tribe who sharpen their teeth with a chisel for aesthetic reasons. Tattooing is done with a needle and wood which is hammered on the needle by a shaman called sikerei. Menatawi worship spirits, have their own unique traditions and shamans. In southern part of the island there are coffee plantations were kopi luwak is produced, the best, and the most expensive coffee in the world. 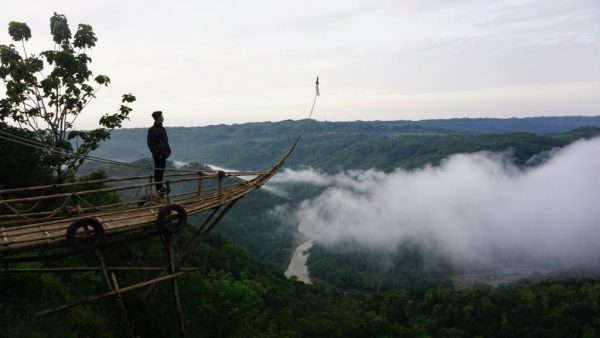 Java is Indonesia’s 5th biggest island. Despite being mainly Muslim, one can find both Hindu and Buddhist enclaves here. This interesting land is a mixture of both magnificent nature and unique culture, which is definitely worth seeing. Actually, world’s biggest Buddhist temple, Borobudur, is located here. It was built in 8th/9th century. The next temple is Prambanan, breathtaking Hindu complex built in more less the same time as Borobudur. Unfortunately, this temple has been destroyed by numerous volcanic explosions and earthquakes. Originally, it consisted 250 buildings, only 11 survived till today.  Both of them were added to UNESCO list in 1991.

Java is known mainly for its volcanoes, not the tallest, but for sure very spectacular ones. The most popular are Bromo ( 2329 m), Semeru ( 3676 m) and Gunung Merapi ( 2968 m ). Merapi, meaning ‘The Mountain of Fire’, is an active one, constantly emitting smoke. Its last eruption happened in 2010. It is wildly considered to be the most active volcano in Indonesia.

National Park Karimunjawa is more than worth mentioning, it consists 27 picturesque small islands. Located 100 km north from Java, it makes every newcomer feel like being in an actual paradise. Amazing white sand beaches and crystal clear turquoise waters make it very hard to leave this place.

Komodo and Rinca are commonly known all over the world as being a home for monitor lizards, huge reptiles, Komodo Dragons. They are very dangerous animals that live only in this area. They are 3 meter long and weight 90 kg. A three-day-cruise may be taken form Labuanbajo, a harbour in Flores island. This is actually one of the best Indonesian attractions.

Sulawesi is another fascinating island. It is a home for Tana Toraja, people whose attitude towards death is extremely unusual. Their long lasting funerals, 7- day-long, during which dozens of buffalos are killed, their ‘walking dead’, and burials in rocks or tree trunks attracts many tourists. Some of them like it more some less, but the only thing is sure on visiting Rantepao one has to be prepared for extremely strong impressions.

The Molucca Islands, sometimes called the Malukus or the Bandas, are situated in the Banda Sea, and are historically known as the original Spice Islands. It is region very little known by tourists, what’s a pity, as here is a kind of paradise. Untouched coral reef and beaches of Balinese beauty, dense jungle, volcanoes and picturesque temples makes this place a real heaven.  In the north of the archipelago there is Ternate, a real alluring island, the best in the region, in the centre of which there is a volcano.

West Papua, this land is shrouded in mystery, yet blessed with the most famous bird in the world, the bird of paradise. It is also the land of spectacular beaches and coral reef. Inland there is massive mountain range with Carstensz Pyramid, the highest peak of Oceania, dense untouched jungle, wild rivers, vast swamps full of danger; but first of all it is a home for unique native tribes.

Commonly known Raja Ampat is the fabulous region of never-ending, beautiful coral reefs, that are very rich. Biak island is worth mentioning just because of its fantastic waterfalls, imposing caves, crystal clear water, breathtaking landscapes and spectacular beaches, those that can only be seen in travel folders. Inland is inhabited by native tribes such as Korowai and Asmat, tribes of former head-hunters and cannibals.

Indonesia can be easily called a fairytales country, the one where all your dreams come true. Everyone finds something for themselves in this marvellous land. Geographical location makes it unique as far as variety of flora and fauna, diversification of the terrain, cultures, traditions and religions is concerned. Its diversity is reflected in Indonesian National Phrase ‘Bhinneka Tunggal Ika’ –‘Unity in Diversity’.