The remote location of this island makes it even more interesting. The distance from Europe to New Guinea is around 13 000 km. Moreover, landing here means going many centuries back. This land is shrouded in mystery, yet blessed with the most famous bird in the world, the bird of paradise. It is also the land of spectacular beaches and coral reef, the ideal place for those who love sunbathing, swimming and snorkelling. However, the island proposes a wide range of activities. Its swampy and riverside areas, impassable, ‘virgin’ jungle, high mountains and vanishing tribes inhabiting this territories can satisfy even the most demanding traveller.

While reading about New Guinea we encounter many terms describing the island. Unlimited nouns and adjectives are all over, and they can shine a light on this land giving people a view of its interior. It is described as a ‘place where the time has frozen’, as ‘the last piece of a virgin land’ or as a ‘Stone Age’. Frankly speaking, it is so. West Papua can be easily described as ‘Stone Age within Atomic Age.’ While Westerners had been learning how to use the first credit card ‘Bank Americard’ or had been flying to the moon, the missionaries had been trying to understand native tribes of West Papua head-hunters and cannibals. Not much has been changed since that time apart from abandoning cannibalism. West Papua is still pathless, impenetrable, strict and often intolerant for newcomers but together generous, abundant, and ample.

Commonly known Raja Ampat is the fabulous region of never-ending, beautiful coral reefs, that are very rich. The record was broken in 2014 when the largest amount of fish spices was recorded during  one diving. Diving conditions are perfect all the year round as there is neither dry nor rainy season. Moreover average water temperatures oscillate around 28-30°C.

Biak is worth mentioning just because of its fantastic waterfalls, imposing caves, crystal clear water, breathtaking landscapes and spectacular beaches, those that can only be seen in travel folders. The history lovers may visit numerous post- locations of the Japanese Army. You need a few days to visit the Biak unless you want to discover it extensively. Otherwise even a month is not enough.

West Papua boasts about having tall and long mountain ranges such as Sudirman and Bintang. Here is the highest Australia and Oceania’s summit Carstensz Pyramid or, as naitives call it, Punack Jaya. It is a real paradise for trekking and high mountain climbing, both for beginners and professionals.

It is here where the Baliem Valley lies, at an altitude of about 1 600 meters above the sea level. This stunningly beautiful valley is inhabited by native tribes such as Dani, Yali and Lani. They live in accordance with nature in the same way as their ancestors did. Their villages are not only settled in valley itself but also they are located on the mountainsides , which makes trekking there unforgettable, just because of gorgeous views. Dani are very kind and open- hearted people as long as incomer respects their beliefs and tradition. They can introduce us to their houses and life, take us into the world of spirits and shamans, and make our stay there unforgettable and absolutely unique.

Dani have never been cannibals. Cannibalism as it is, has never existed in Baliem Valley, that’s why we cannot face head- hunters here. If you do want to meet them you need to move a bit south, inland to the jungle where deep in virgin forest lives native tribe of Korowai people. They are known for building their houses up in the trees. Unfortunately there are around 4 000 people left and those who live among trees, as their grandfathers did, are in large minority. Only 28 clans lead their lives that way, and every clan consists of around 5-8 members. Nowadays Korowai people are Protestants, however the last act of cannibalism in that area was recorded in 2012. The journey to that place definitely remains unforgettable for a long time. 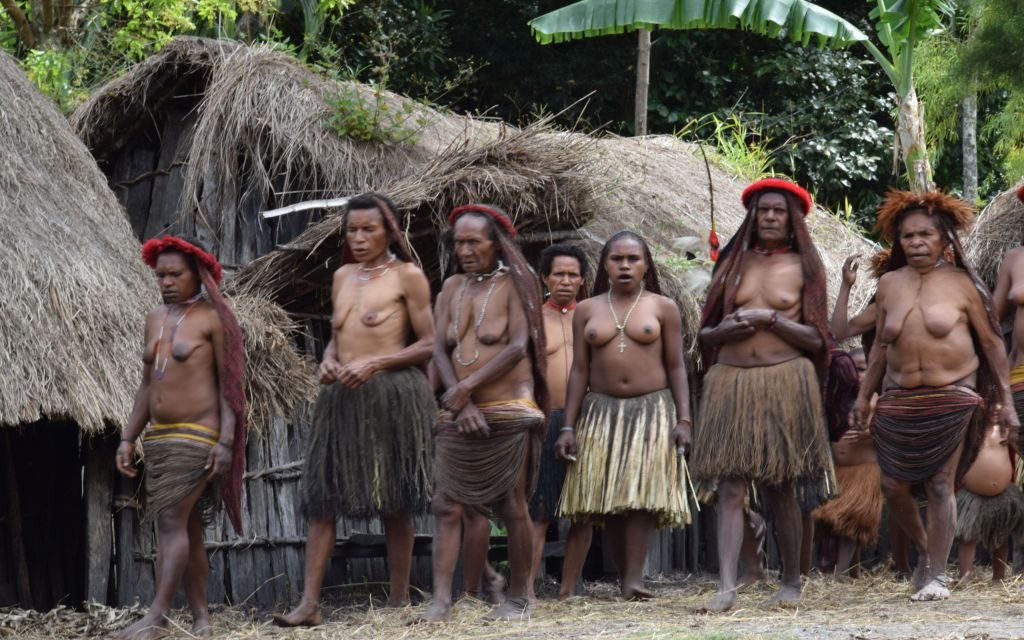 The Asmat tribe is also a community of ex-cannibals and head-hunters. Actually, their demand for vengeance or sacrificial victims is still vivid and essential in rituals. They are said to have eaten Michael Rockefeller. Now they claim themselves to be Christians and lead quiet life at the seaside od the Arafura Sea being commonly known as the most talented and stunning carvers in the Pacific area. However the leitmotiv of their art is cannibalism.

West Papua is the place that can satisfy even the most demanding traveller, scientist or ethnographer. There are virgin places, still untouched, unknown, unexplored so far. Unfortunately, civilization is reaching that area, so as to see the virgin place it is crucial to visit the island as soon as possible. Not to miss the last possibility to meet people living in accordance to nature, to see untouched land full of shamans and spirits.