Toba is the biggest lake located in the Malay Archipelago. Indonesia, and especially Sumatra where it can be found, boasts about its beauty and uniqueness. The lake is pretty big being approximately 100 km long and 35 km wide. Actually, as far as the biggest world’s lakes are concerned, Toba is classified very low on the list, and even looking at the list of the biggest Asian lakes it is on a very distant, 29 place, but it definitely attracts public attention and is ‘the must’ for those who arrived on Sumatra.

History of the lake

Toba’s history begun about 75 000 years ago as a result of an explosion of a supervolcano. It was the strongest explosion ever, which caused a ‘nuclear winter’ all over the world. As a result, the human race become critically endangered species. The scientists estimate that only 5000 to 6000 people survived the disaster. Not only did the enormous explosion kill them but mainly what the tragedy did, was causing the climate changes that came afterwards. Winter took the oath of supremacy for over a 1000 years, and life was strictly limited on the Earth. If nowadays one of the volcanoes exploded in that way, it would definitely terminate our civilisation. According to experts, while exploding, the supervolcano spew 3 000 km3 of magma, 5 000 km3 of hot, dangerous gases, ash, lava, and rocks. Therefore in the atmosphere arouse over 10 mln tons of sulphuric acid which reflects the sunlight and remains in atmosphere for a very long time, hence such a long and freezing winter on our planet. Toba is 529 meter-deep, and is the biggest volcanic lake, and such ones are amongst the most spectacular natural features on the planet. 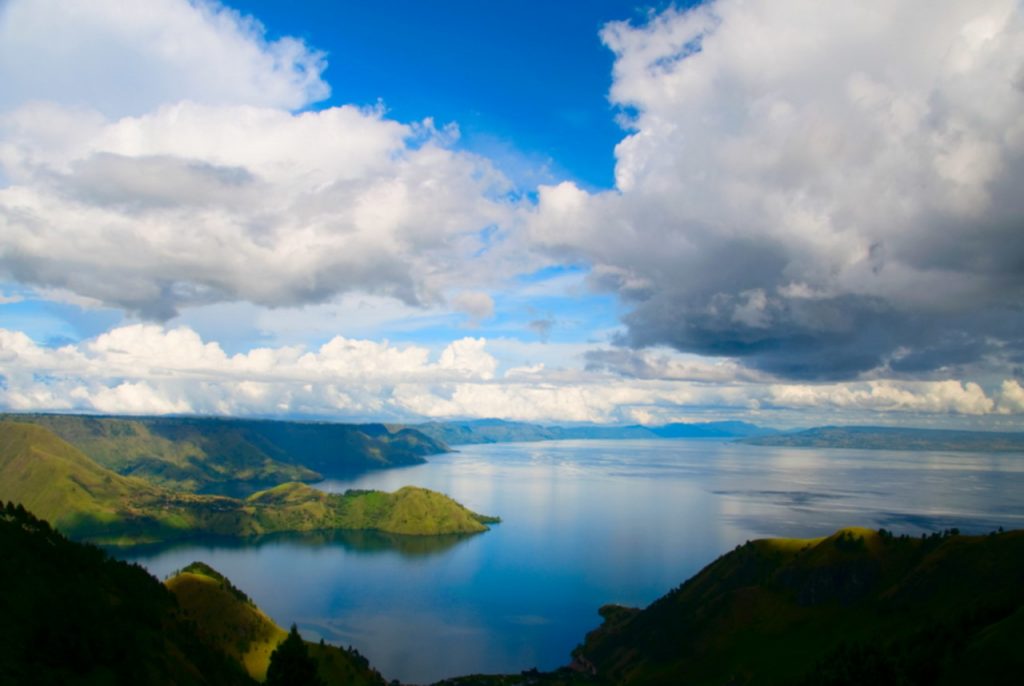 In the middle of the lake there is a Samosir island. It has been inhabited by Batak tribe, who had been cannibals until 1905. At present Batak are not cannibals anymore. They are known for building wooden boat-shaped houses. About 40 % of them declare being protestant but traditional beliefs are still crucial in their everyday life. Religious syncretism is as common here as everywhere else among the native tribes of Indonesia. Batak are well-educated and very ambitious nation. All of them speak Bahasa Indonesia which significantly differs from their native language. Many of them occupy high state positions and many teachers, lawyers, and doctors come from that community. By the end of 19th century that place had been settled by cannibals who ate mainly old and those who could not work anymore. It happened quite often that children ate their parents. The genesis of cannibalism was different from those of Papuan origin, but endocannibalism existed all over the area.

How to get there and what to see

The access to the island is very easy, you can take a ferry or rent a private boat and being on Samosir the best way to move is by scooters that can be found all over the place. It is the best, the cheapest and the most convenient way of transport; no driving licence is needed, moreover, no driving skills at all are required. To visit this awesome place one needs to have just few days off. Among breathtaking waterfalls and hot springs it is easy to forget about the time flowing. The traditional houses are located everywhere which creates a unique atmosphere of the place. To see a traditional interior of such a house it is worth visiting the local open-air museum called ‘Chairs of King’. Houses are very similar to those of Tana Toraja, Sulawesi. Those are also in a shape of boats or buffalo horns. Near Tuk Tuk town, there is Tele, an observation tower where tourists can see the area: amazing lake, mountains and abundant nature. Sipiso Piso is the most beautiful waterfall in the area of height of 120 meters and it makes it the highest waterfall in Indonesia.

The area surrounding the Toba Lake, and the lake itself, is an amazing place which can be marked by ‘the must see’ label. It is very easy to get there, most of the visitors come from Medan, the northern city with an airport. Both, the buses and rented cars are possible, depending on what you want. Neither of them are expensive, but the car offers definitely more convenient and quicker way, meanwhile the bus represents the local transport and can wrap us with the touch of locality. Apart from beautiful landscapes, Toba Lakes boasts about rich and impressive native culture, and very king people, who used to be cannibals not such a long time ago. What more could you want!