Karimunjawa – the eye of Dua Benua

Indonesia is commonly known for its diversity and incredible beauty that remain in the consciousness of visitors for a long time. This country can easily deal with the requirements of all types of tourists, even the most demanding ones. However, hardly can we miss in the area of 2 000 000 2 km dirty and repulsive places, although Indonesia can bewitch you. It still remains one of the world’s unique countries that has territories yet untouched and where people can relax surrounded by lush nature. There are many fabulous areas still unknown or rarely visited. To such a region belongs Karimunjawa islands usually called Karimun Java. It is located 80 km northwest from Jepara, a town of population of 1 million, known for the Javanese teak wood carving art. Indeed, Karimunjawa can be easily compared to crouching Sumatran tiger. As a matter of fact, it’s a pure paradise as rare as that species. Moreover, it is also critically endangered. Being little-known so far it is still safe&sound. However, the more tourist are to come here, the quicker it results in environmental degradation. The infrastructure and transport development will affect the traditional lifestyle and nature. That is why Karimunjawa should be considered as ‘The Must’ as soon as possible. Only by going deep into the land will you face ‘the dragon’, an enormous creature which breathed incredible beauty that absolutely and completely overwhelm you. It’s charm defeats you and there is nothing more wonderful than being seduced by sterling nature.

Karimunjawa is a chain of small islands enclosed by turquoise waters, amazing white sands, fresh air and breathtaking views. It is a fantastic place for taking the edge, refocusing. If you want to escape from hectic life then here you go! The best time to visit Karimunjawa is April to October. That time also includes summer vacation in Europe. Things couldn’t be better as we all know how tough it is to organise a good holiday for kids if it comes to the other side of the world. It is usually wet season there what makes things a bit more challenging. However, Karimunjawa is bigger than this. Going there you mustn’t forget to take a pair of sunglasses, hats and a sunblock. October is the warmest month with temperatures averaging 29°C and August being the driest one. While the wet season is concerned, stop painting the devil on the wall. Despite most of the precipitation here falls in January, it is still pretty warm with the average temperature oscillating around 26°C. For us, European, it seems almost perfect.

The archipelago is exceptional not only because of the weather. It is its geographical location that makes it unusual as well. Karimunjawa is the home of an amazing coral reef, mangrove forest, astonishing beach forest and also 400 species of fauna. The archipelago was declared to be a Natural Reserve in 1986 and since then it has been considered as one of the top-priority areas for the conservation of marine biodiversity in Southeast Asia. Moreover, in 2001 it was declared as Marine Protection Area covering the area of over 110 000 ha. It was among the first areas recognised as being important to conserve and protect. In general Karimunjawa consists of 17 islands, 5 of which are inhabited. Karimunjawa is the biggest one, also being the archipelago’s economic and financial centre. The airport is placed in Kemujan island and the other inhabited ones are Nyamuk, Parang and Genting.

Karimunjawa has a mix of various ecosystems as well as a marine national park: coral reefs, sea grass, seaweed and mangrove forest offers million dollars sea views. The diversity of flora and fauna is amazing; 44 different species of mangroves, 11 species of sea grass, 9 of seaweed and 444 species of fish. Even coral itself has about 180 different species that can be effortlessly seen while snorkelling or diving. Indeed, the rarest, near threatened examples like black coral (known as Antiphates sp.) and organ pipe coral (Tubipora musica) can be seen here. The waters of archipelago are also the home of vulnerable hawksbill turtles and least concern green turtles. Diving here can really be unforgettable experience. If you’re a little more adventurous go to Menjangan island where sharks have become a tourist attraction. Swimming with them is a must-try activity there. It is quite safe, as sharks are smaller than usual and they don’t bite. Besides, the guide will also ensure your safety. Wreck-diving enthusiasts will also find what they need. There are some wrecks lying on the bottom that are pretty attractive for divers.

Like everywhere else in the country, you can also find amazing terrestrial animals that will astonish you. Diversity and richness of fabulous and colourful birds is magnificent. The most tremendous are: the Javan hawk eagle, a medium-sized raptor and red-breasted parakeet and a cute little bird identified by a large red patch on its breast. Uninhibited islands of the archipelago make a perfect place for a lunch or fun relaxing activities; some of them are water sports. There is no better place to relax than lying under swaying palm trees. If you’d rather be more active another task maybe going fishing. There are two options: either can you rent a fishing boat from some travel agencies or do it yourself. Locals will tell you where the good fishing spots are. If you catch some cook them and enjoy fresh fish, unforgettable experience especially while witnessing the amazing sunset. The most spectacular can be seen on Tanjung Gelam. 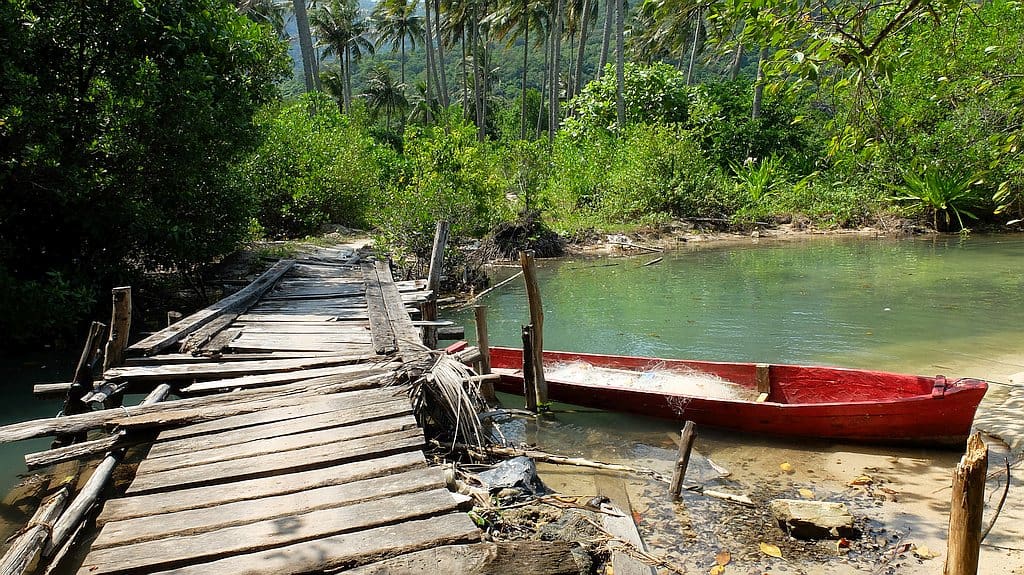 The mangrove forest, mentioned before, is also very attractive place for tourists. You can explore 11 km2 of nature and its beauty situated only about 2 km from Karimunjawa harbour. It can be easily reached by bike or on foot. When entering the forest you will be welcomed by lush nature and colourful fish swimming along the beach. A wooden path that takes you deep into the forest is made from old and dead mangrove wood. The route is winding with lots of turns that makes one feel as if they were entering the fabulous dark woods full of mysteries. One of its secrets is a unique Dewadaru tree known also as Ceylon Ironwood or Indian Rose Chestnut. It has actually became an icon of the island.
A glaring alternative is so-called ‘island hopping’ what means visiting one island after another within one full day. Actually, it is a very popular way of sightseeing the archipelago. During such a one-day trip a local fishing boat head out to islands either to the western or eastern sides of Karimunjawa. The side depends on weather conditions. You are welcome to snorkel with a guide if you wish. They will just pointing out things you may miss and keep you safe. Later you may admire the landscape. There is a lunch included in price and in the evening watching the unbelievable sunset over the ocean. Such a trip is about € 13 and it can be booked through your accommodation. The only thing you have to be aware of is the weather report as island hopping while raining doesn’t make sense.

And yet, the history of the archipelago there is still worth being mentioned. According to a local legend, Karimun means not clear or obvious, as in the clear weather the islands can be seen form the coast of nearby Java, but not clearly. Karimunjawa was originally settled by one of the Muslim Saints Sunan, who actually introduced Islam to Java. The island has been known by navigators worldwide as a paradise, a heaven on the trade roads through Javanese sea to Borneo or Moluccas. Another interesting thing is that the name of Karimunjawa on old maps differs. There are many versions: Tortuga, Chirimao or Carimon. Historical sources relate the discovery of the archipelago in 1293 by Chinese called Chilimen. Nowadays it is a perfect place, a stop-pit for those who travel by sea from Australia to Thailand or China, or other way round. Unfortunately, Javanese is the most common language of communication between locals residents, with Indonesian widely used and understood as the national language. English is not understood, so you’d better learn some Indonesian.

Some tips from Dua Benua

The accommodation is not a problem all over the archipelago. There is no shortage of places to stay form four-star hotel to homestays or campsites. There are even private cottages available for those who want an intimate experience. Some hotels are located nearby the main harbour and rest of them is inland.

Reaching the archipelago is not difficult at all. You can get there either by air or by boat. The flights are provided from Surabaya or Semarang, cities located on East and Central Java and are pretty short and last accordingly 30 and 40 minutes. There is also a ferry travelling form Jepara Regency harbour. Two kinds of ferry are available: either a speedboat travelling approximately two hours from Jepara to Karimunjawa and costs €10 or a regular one travelling for five hours of expense about €3,5. A pretty good idea is to buy a VIP seat. They charge us only €2 more but the comfort makes a difference. The seat are very comfortable and the room is air-conditioned. The common area doesn’t have any aircon and the seats are uncomfortable leaving alone super noise and congestion.