This article is going to focus on the southern region of Bali, meaning the Kuta and Denpasar areas. These towns are the most touristic districts of the island. Therefore, they are avoided by those who are in favour of quieter and more peaceful surrounding. Such can actually be found not so far from there and are ‘the must see’ if you are to visit Bali. The first one is an attraction for families with kids, or for those who for some reasons, cannot see the whole archipelago which is abundant in awesome, mainly endemic, flora and fauna.

Animals living in Indonesia, India and Africa can be seen in the Bali Safari & Marine Park. It is one of the biggest parks covering 40 hectares of the land in Gianyar regency. It was established by Taman Safari Indonesia in 2007 and is the island’s most visited animal theme park. Here, we can find an impressive collection of 80 species and 400 specimens including Himalyan bears, nigali, deer, hippos, zebras, camels, baboons, ostriches and lions. The most epic one, gathering the majority of visitors’ attention, is an Indian white tiger. Safari tram is the vehicle that helps guests to visit the park. It takes visitors to man-made habitats of Indonesia, India and Africa and provides them with the opportunity to see the wildlife living naturally. Vehicles are comfortable, air-conditioned with a safari guide inside. You can feel as if you took part in a real African safari without hours passing by looking for a dream animal.

It is best to be there at the opening time as it usually takes a full day to enjoy all that the park has to offer. Kuta to Gianyar are separated by as little as 33 km so it is easy to get there. You can have a taxi which takes about 30 minutes to arrive. You can have a bus which is much cheaper but, instead of 30 minutes, it takes more less 75 minutes, depending on traffic. There are Kura-Kura buses that leave five times a day and Perama bus leaving every two hours. Finally, you can get there by the motorbike that can be rented all over Bali, and actually, is very popular and cheap mean of transport.

Within the Safari & Marine Park there is one of the island’s most unique accommodation: Mara River Safari Lodge. It mimics the African wilderness providing you with unforgettable atmosphere. There is a collection of fully air-conditioned suites built in African safari hut styles with wooden furnishing and tribal-themed artefacts. Every hut features an open-air terrace where you can admire the open savannah with its’ roaming animals. The rooms reflects the rustic charm of the African Safari. Sitting there, you can also relax by a lovely view of Mount Agung in the distance. Moreover, travellers will have great fun watching and feeding the wild animals from their very own balcony.
Visiting this place you kill two birds with one stone. Being on Bali, picturesque island, you can not only learn about Asia and its’ amazing atmosphere but also be moved by the beauty of infinite African plains covered by bush and get to know their residents and their routines. It is awesome attraction for both families with kids and adults. Seeing Indonesian white tiger, for instance, is not an easy thing even in zoos, leaving alone meeting it wildlife face to face. This is worth its price. 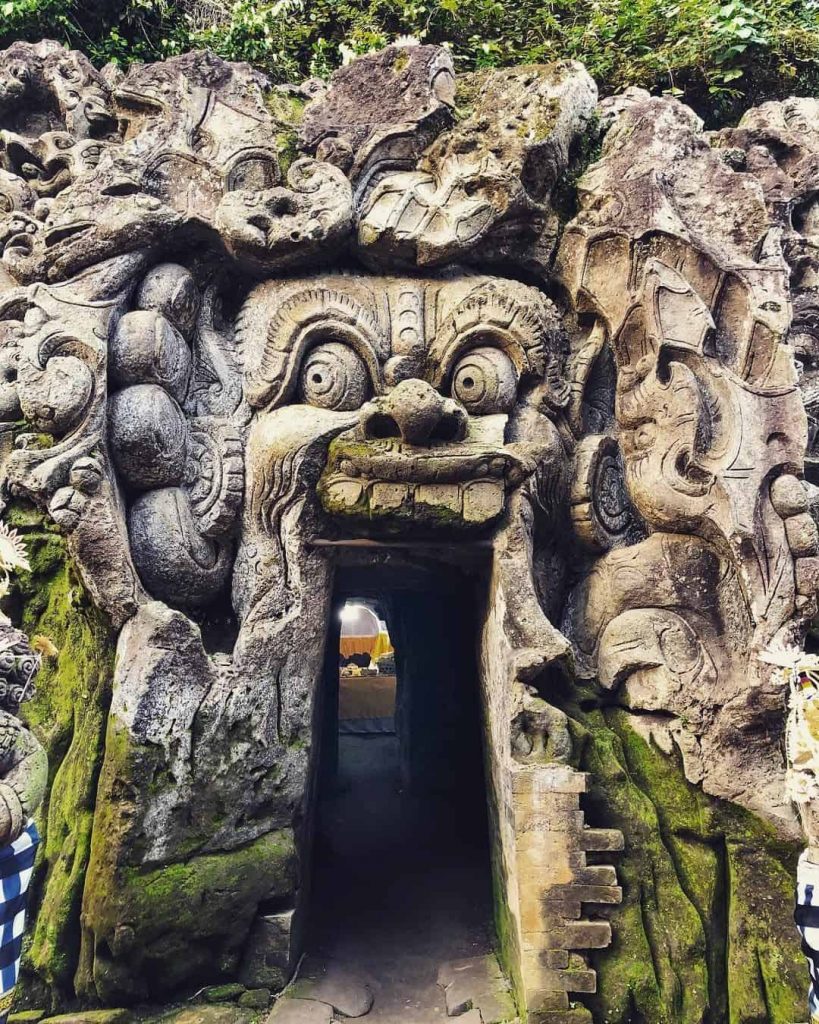 Another interesting place that should be seen is Goa Gajah. This is something absolutely different from Safari Theme Park. Not far from Ubud it’s easily reachable by bikes or motorbikes. A travel from Denpasar, located 27 km away, is not a problem either. There is a small cave which was added to the UNESCO World Heritage List on October 1995, in the cultural category. The origin of this temple is not known but the leading theory suggests that Goa Gojah was used as a hermitage or sanctuary by Hindu priests who dug the cave entirely by hand. In the 9th century it was converted into a temple. At first, it used to be Buddhist place of worship which soon had been turned into a Hindu one. This cave is built on the brink of a meeting between two small rivers Kali Pangkung and Petanu. This area is deemed to have a magical power based on a concept of Rwabhineda. Based on this concept, it seems that Goa Gajah is indeed built here intentionally.

The name of Antakunjarapada is mentioned on Dawan Inscription in 975 A.D. According to scientists ‘Kunjara’ means ‘Gajah’, ‘Anta’ means ‘end’ or’ limits’, and ‘Pada’ means ‘area’ or ‘region’. When it is combined it means ‘Gajah Border Region’. Next time the cave was mentioned was in 993 and another one can be found in 1365 in the Javanese poem ‘Desawarnana’.

The Goa Gajah is T-shaped and consists of vertically shaped hall and main room with 11 niches. The entrance of the cave is ornamented by the sculpture of Kala’s head with eyes glancing to its’ left side. It is said that the entrance represents the cavernous mouth of a demon. It dates as far back as the 11th century. The function of Kala is the same as Bhoma – just to maintain the sanctity of asceticism and provide the protection. Goa Gajah is relatively small and shallow and it takes few minutes to explore. You enter through the dark, narrow passage. The cave abruptly ends with an intersection. Goa Gajah is a natural mountain carving. Among the reliefs inside there are trees with limbs and dense leafs, animals such as wild boar or tortoise. You will also find three stone statues there, each of which is wrapped individually in yellow, red and black cloth. A few meters away there is a pond of Patirtaanma place where holy water was taken for ceremonies.

When the glorious time of the temple was over it was abandoned. Few years later it was covered with vegetation and absolutely forgotten. The cave was rediscovered in 1923 by Dutch archaeologists, however the holy pond, that was buried in the ground, and fountains were not found. It was 1954 when Krijgsman found it successfully. He learned that the complex consists of 7 statues of women holding water pitchers. One of those statues was destroyed due to an earthquake. The existence of 7 fountain statues is based on the concept of Sapta Tirtha, the seven holy water which has purity equal to Sapta Nardi – seven purified Indian rivers Gangga, Sindhu, Saraswati, Yamuna, Godawari, Serayu and Narmada.

Goa Gajah is also known as the Elephant Cave which is a bit bizarre as there have never been any elephants in Bali. They arrived here due to tourists who made them the main attraction. However, the origin of that name is not known, there are few theories. Some sources state that it is named after the Ganesh, stone statue of the Hindu God; other state that it is because of the face over the cave entrance that might resemble an elephant; another theory ascribes it nickname to the nearby river Petanu River, which at one time was known as Elephant River.

Goa Gajah can attracts visitors by its amazing surroundings. There are picturesque rice fields, many paths that can lead us to shady valley with small beautiful waterfalls. Amazing rainforest gives some shadow where tourists can have some rest.

What to know before visiting the Goa Gajah Temple

Goa Gajah is opened seven days a week from 8 a.m. to 4:30 p.m. The entrance fee is about $1, depending on the currency rate, of course. When visiting Goa Gajah you shouldn’t forget about proper dress that is required there. Knees and arm must be covered by both women and men. Local people mustn’t be photographed during their prostrations. There is no light in the cave, neither artificial nor natural one, so you must take a torch. As it is a popular stop try to be here at the opening time just to avoid the crowds. You can visit the cave and do some sightseeing tour by a motorbike that can be rent in Ubud for $5 per day. There is a parking nearby the cave, so you can safely leave you motorbike there.

Bali is an extremely unusual island, full of mysterious temples, abundant nature, picturesque beaches with white sand and local traditional villages. There is no chance you get bored here, it’s way too beautiful and interesting.