The topic of religion in Indonesia is as deep and difficult to be analysed as many other plots dealing with that outstanding country. Indonesia is a huge country containing large number of island each of them is utterly different. In fact they could easily be a separate country. About 300 ethnic groups live in Indonesia, and over 700 languages are spoken there. Due to this fact followers of various religions can be met here, too. The topic becomes even wider as long as native tribes’ beliefs, and the issue of missionaries are concerned. The government recognises only 6 officials religions. Islam is the most adhered religion in Indonesia with 87% of Indonesian population identifying themselves as Muslim. Then there is about 7% of Christian Protestant, next comes Roman Catholic with 3%, 2% of Hindu and 1% Buddhism and 0,5% of Confucianism. Indonesian law requires that every Indonesian citizen holds an identity card that identifies that person with one of these six religions.

Islam has already reached this land in 12th century together with Muslim merchants from India. However, not until 17th century has it spread and dominated all over the country. Numerous rules and their subordinates voluntarily accepted that religion, so in 18th century it almost monopolized nations. Indonesian version of Islam belongs to a mild variety and is much more tolerant than the one in the Middle East. Indonesia is said to be the perfect example of how to match Islam with democracy. However, even here, the women’ rights are somehow restricted in comparison to men’. They are men who are more important in local societies, and it is always them who are decisive. The role of a woman is limited to being a housewife. In big cities, in well-educated families, the situation is being gradually changed. Most of Muslim live on Sumatra and Java. Almost 50% follow the orthodox Islam, others ale followers of less radical branch of the religion.

Christianity occurs on the archipelago relatively late. Not until 16th century did Portuguese and Dutchmen arrive. It was them who introduced Christianity to Indonesian society. Portuguese recommended Christianity and the Dutch Protestantism. It was time when the Netherlanders set off on expeditions in the area. They dabbled in spice trade which actually flourished due to high European prices especially of pepper which become very popular in our cuisine. At first Dutchmen were not interested in evangelism, Portuguese were good at it and it was their domain. Just at the beginning of 20th century the Dutch authorities set their mind on the way the local people lived. They decided to begin conditions improving policy, which resulted in bringing many Catholics to the colony and the Christianity began to spread over. Nowadays Christian communities are scattered over a wide area: North Sumatra, Kalimantan, North Sulawesi, Molucca, Flores, Sumba and West Papua. West Papua soon turned into thriving centre of Christianity with numerous number of missions and missionaries. They are still there, helping native tribes and showing them their way. 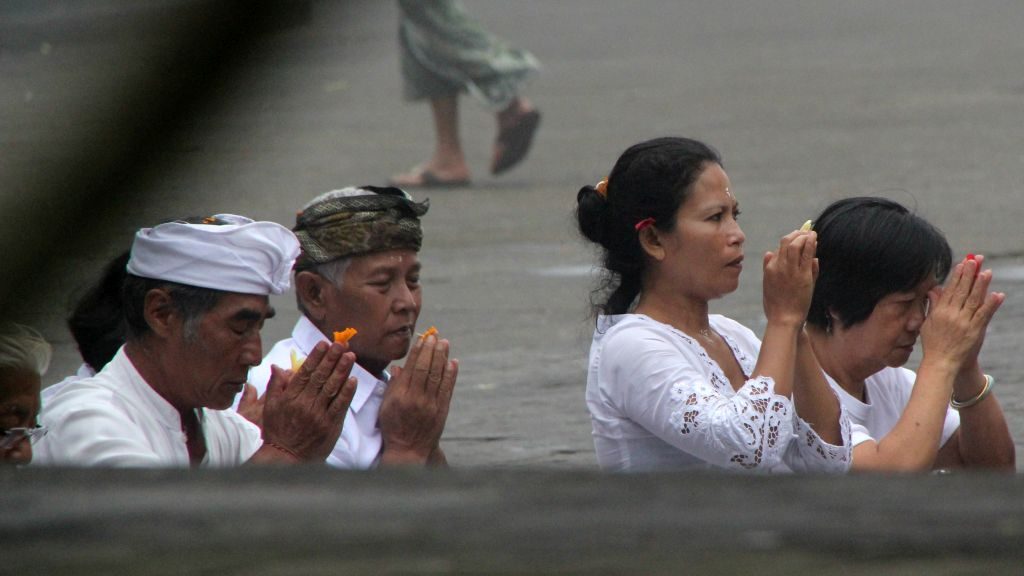 It appeared in Indonesia, Java actually, as early as in 2nd century but started to spread out only 350 years ago. It was when Hindu arrived on Bali as a result of religious persecution. From that moment on Hinduism started to flourish and nowadays it is a dominating religion on Bali that has a big influence on Balinese culture. Local art is characterised by rich ornaments that present plants and animals. Balinese people live in harmony with nature and gods, what can be seen in their art. Bali is absolutely mystical with unique climate that can be faced only here. All life is subordinated to religion. Balinese regularly make gifts to their gods, altars are everywhere, every single street and pavement is covered with them, which composes a unique atmosphere. Gods and demons live side by side maintaining balance. There are over 11 000 temples around the island, every village has few of them. Balinese Hinduism is a branch of Agara Tirtha, meaning holy water religion and it is influenced by Buddhism and local animism.

That religion has existed in the area since 6th century. The most characteristic feature of Buddhism is that it has never been spread by missionaries. It was practised only by those who voluntarily defected to it. Merchants that were Buddhism followers, settled in Indonesia due to business affairs. Soon local rulers got to know about the new religion and turn to it. In this way Buddhism escalated all over Asia. In Indonesia it was practised until the 16th century, than it was displaced by Islam. Nowadays Buddhism gets an inaccurate percentage of followers and they are mainly people of Chinese origin.

It was officially recognised as a religion in 2006. That act was to terminate long-term discrimination process of Chinese minority in Indonesia. The history of Confucianism dates back to the beginning of 20th century. However, it was not a pure form, as Chinese society living in Indonesia didn’t practise it that way. Confucianism was strongly influenced by Buddhism, Taoism and some of the followers even introduced elements of local traditions. In 1965 Sukrano , the President of that time, declared Confucianism to be an official religion but not until 1979 the government withdrew the decision and the process of Chinese minority persecution and isolation began. At presence Confucianism is said not to be authentic, some people claim that its form is not pure and original. Despite such accusations it is officially recognised as one of the Indonesian religions.

It is definitely not a religion. It cannot be claimed as being an official church whatsoever, but it is quite an essential issue in that article so it shouldn’t be missed. Animism is a belief that object, places and creatures all possess a spiritual essence. It is often used as a term for the belief system of indigenous peoples; that’s the way they perceive the world, by spiritual or supernatural perspectives. Every single animistic society has its own medium, which is somehow a vital intermediary between transitory and spiritual worlds. Medium ranks high social position and is seen as an extremely wise person. Animism can be faced all over the Indonesia but it is especially often met in West Papua among Dani, Lani, or Yali,or the Asmats, who declare themselves as being Christian since mid- 20th century. Korowai tribe claims themselves as Protestants since late 80s. In reality, religious syncretism is so common that it is very difficult to be well-oriented in their religion.