Komodo dragons are commonly known all over the world. They are so famous because of two factors. First of all, they are the last representatives of their species that had lived millions of years ago. Secondly, it is an endemic species that exists only in one particular geographic region. Many legends are associated with these animals, moreover, they are heroes of various films and fairytales. Some think well of the dragons treating them as amazing creatures that can provide tourists with an unforgettable adventure; others consider them to be extremely dangerous livings. Who is right? Are they really deadly machines or rather kind and cute animals?

Spis Treści Ukryj
1 Where do Komodo dragons live?
2 The short characteristic of a reptile.
3 Why the name: ‘Komodo dragons’
4 The future of Komodo Dragons

Where do Komodo dragons live?

Komodo dragons live only on four Indonesian islands: Komodo, Rinca, Gili Motang and Padar. Most of them stay in Komodo Island that become National Park in 1980. It is said that about 1500 giant lizards live here. Komodo dragons prefer dry places, such as dry, open grassland and the savanna, so the area is perfect for them. Flores is a home for more or less 2000 specimens, Rinca houses  about 1300 of them and Gili Motang more than 100. It is actually very difficult to estimate the real number of animals staying on one island as lizards move freely between these lands. The borders of the National Park are not for them. They can be occasionally met on Lombok and many other nearby and uninhabited islands. These big scaly predators arrived here about 900 000 years ago from Australia. They stopped for a while just to stay here forever.

The short characteristic of a reptile.

Komodo dragons are the heaviest and the biggest lizards on Earth. They have long, flat heads with rounded snouts, scaly skin, bowed legs, and huge, muscular tails. These wild dragons typically weigh about 160 pounds (90 kilograms), but the largest verified specimen reached a length of 10.3 feet (3.13 meters) and weighed 366 pounds (166 kilograms). Males tend to grow larger and bulkier than females. Despite what is commonly believed, monitor lizards are not descendants of dinosaurs. They are much younger than dinosaurs and secondly, their anatomy is different.

Dragons are definitely not human-friendly animals. They are known for being aggressive towards both humans and other beings. Their bites may be deadly, but not to another Komodo dragon. However, the fact is that they can even be lethal to themselves. Why? Because it happens sometimes that the female eats her new-born baby. Actually, they are not good mothers at all. While the eggs incubate in the nest for about nine months the mother protects it but right after her babies are hatched she abandons them and they have to live alone and somehow survive. Female lay about 30 eggs.

Komodo dragons live about 30 to 50 years in the wild. Although males tend to grow larger and bulkier than females no obvious differences mark the sexes. They eat any kind of meat, animals that range in size from small rodents to large buffalos. They definitely are predators at the top of their food chain and are also cannibalistic. Monitor’s sense of smell is primary food detector. It uses its long forked tongue. The lizard’s teeth that are very large and curved are their deadliest weapon. They support large number of bacteria, something about 50 different bacterial strains, some of which are highly septic. They are found in saliva. Lizards have also a venom gland in lower jaw that prevents the blood from clotting, which causes massive blood loss. Those who were hapless victims of Komodo dragon must undergo extremely difficult treatment and need to take medicines all their lives. Scientists have been searching for antibodies in dragons blood that may be responsible for the tragedy, but it is a very toilsome work.

Summing up, it occurred that Komodo dragons are not very much of a cute and lovely animals, they are more like killing machines. As long as they are hungry they are lethal, being full are not much interested in other creatures, and while maintaining basic precautions we can spend some time watching them, but only being accompanied by a highly qualified ranger whom we must be absolutely obeyed. 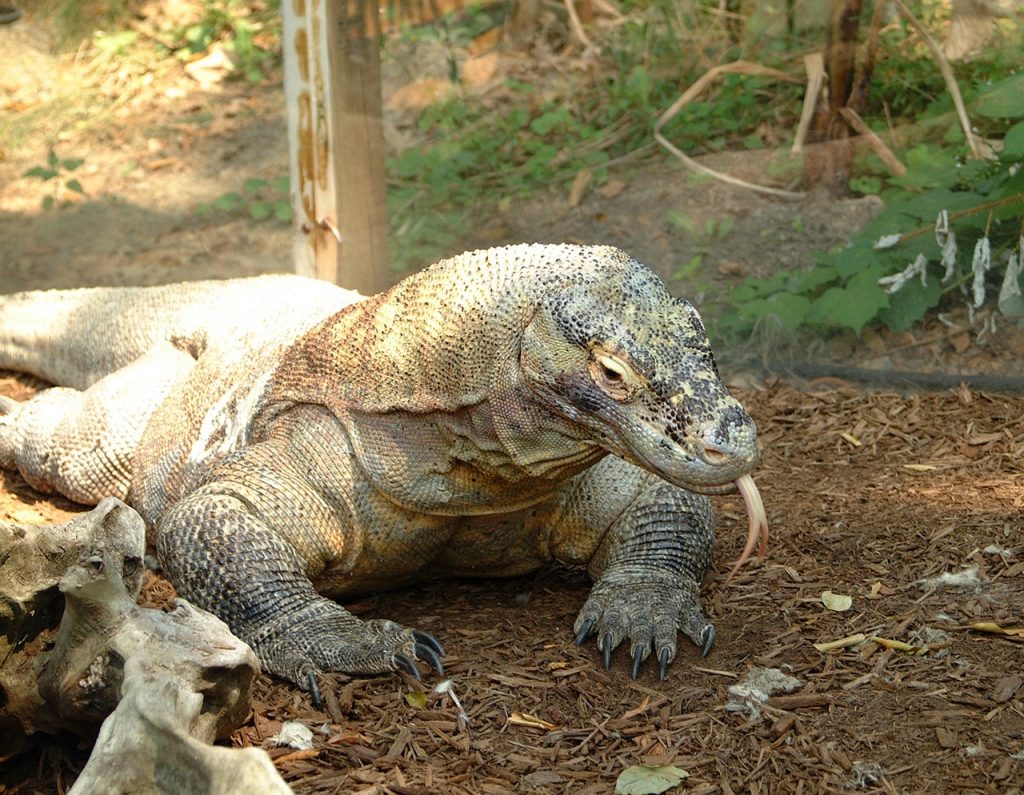 Why the name: ‘Komodo dragons’

It is obvious that dragons do not exist, they are just products of human imagination. So why do we call ‘dragons’ real creatures, that can be seen and touched but can neither breathe fire nor fly?

One of the theories goes back to 1510, when the Hunt-Lenox Globe was created. It is the second- or third-oldest known terrestrial globe. It is full of inaccuracies and unknown places. Many of them had not been yet discovered. The area of Indonesia was one of them, so it was marked by Latin phrase: ‘hic sunt dracones, translated as ‘ dragons lives here’. Such an inscription were to warn sailors against unknown creatures living in that area. According to scientists that inscription was an after-legends theory that this land was inhabited by enormous lizards.

The future of Komodo Dragons

The world has learnt about giant lizards not later than in 1910. In 1980 the area was transformed into Komodo National Park just to protect dragons. In 1991 this park was added to the UNESCO list which means that dragons are fully protected. Are they still endangered species? Well, yes. Komodo dragons are on the IUCN Red List of Threatened Species. The list was established in 1964 and has evolved to become the world’s most comprehensive inventory of the global conservation status of biological species. It is a powerful tool to inform and catalyse action for biodiversity conservation and policy change, critical to protecting the natural resources we need to survive. It provides information about range, population size, habitat and ecology, threats, and conservation actions that will help inform necessary conservation decisions. Similar to orangutans, gorillas, birds of paradise and many other critically dangerous species, dragons have their chance to survive.