Java is Indonesia’s 5th biggest Island. It’s nearly 130 000 km2 big . This area is inhabited by 60 % of this country’s population, more less 130 million people, which makes Java the most populous island in the whole world. These factors make this place densely populated, with nearly 1000 people per km2. Although it may not sound like a place to visit, neither these things nor progressing urbanisation took Java’s beauty away. Its diversity attracts a lot of tourists. Despite being mainly Muslim, one can find both Hindu and Buddhist enclaves here. This interesting land is a mixture of both magnificent nature and unique culture, which is definitely worth seeing.

Java is known mainly for its volcanoes, not the tallest, but for sure very spectacular ones. The most popular are Bromo ( 2329 m), Semeru ( 3676 m) and Gunung Merapi ( 2968 m ). Merapi, meaning ‘The Mountain of Fire’, is an active one, constantly emitting smoke. Its last eruption happened in 2010. It is wildly considered to be the most active volcano in Indonesia. Located in a densely populated area, only 30 km away from Yogyakarta, it hovers ominously over many, many houses. Semeru, the highest one, is the most sacred mountain of Indonesia for Hindu people. Despite being an active volcano, it’s not as dangerous as Merapi. It’s possible to climb all the way to the peak watching breathtaking views in the meantime. This demanding trekking lasts for max 3 days. Bromo volcano is the most popular one. Its known for spectacular sunrise which can be seen from the very top. If you want to experience it, you have to start climbing very early in the morning (or very late at night, depending on your point of view). Seeing sunset that spectacular isn’t something that one doesn’t get to experience very often, which makes this place a must-see, especially for photographers.

This island is full of unique buildings. Actually, world’s biggest Buddhist temple, Borobudur, is located here. Built in 8th/9th century, this amazing 36 meters tall step pyramid was added to UNESCO list in 1991. At this point, it looks very impressive and is a must-see, but things haven’t always been that way. The creators of this temple remain unknown until today, all we know is that it was suddenly abandoned after years of usage. It started being covered by both volcanic ashes and growing jungle, which showed no mercy to this astonishing place. The British discovered it in the beginning of 19th century, but the entire building remained uncovered until 1835 thanks to The Dutch. The temple was built based on the Buddhist way of seeing the world. It’s decorated with rich reliefs showing the life of Buddha. The Merapi explosion of November 2010 covered the whole temple in 3 cm layer of volcanic ash, a big part of this complex was closed. The next temple is Prambanan, breathtaking Hindu complex built in more less the same time as Borobudur. Their history is analogical, it was suddenly left with no apparent reason, discovered by the British in the beginning of 19th century and added to UNESCO list in 1991. Unfortunately, this temple has been destroyed by numerous volcanic explosions and earthquakes. Originally, it consisted 250 buildings, only 11 survived till today. 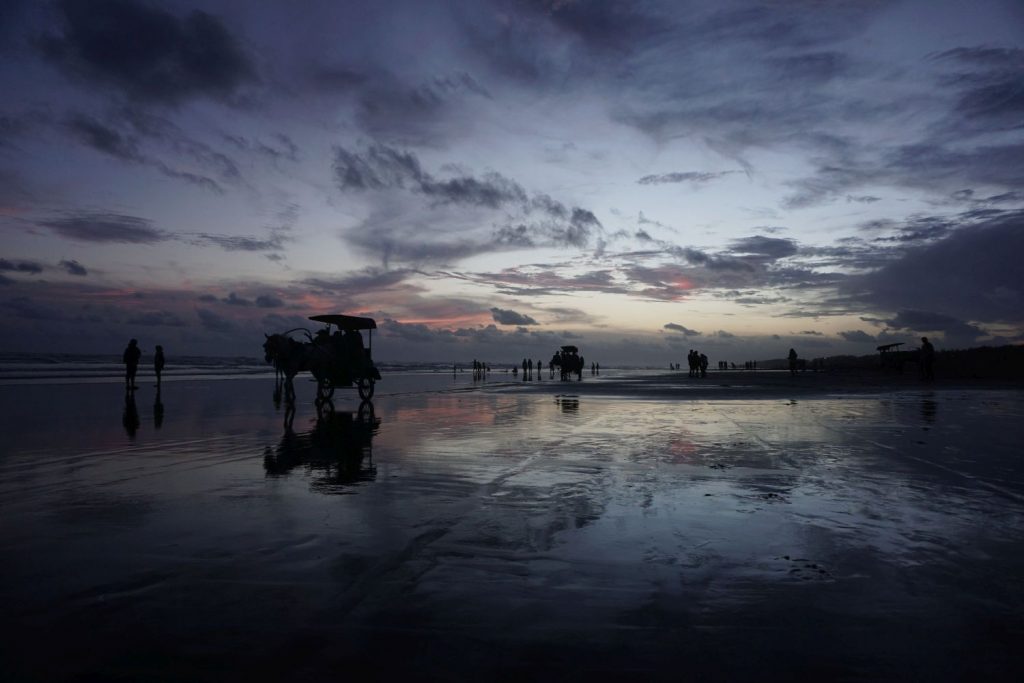 The power of nature

The next amazing place on Java is Kawah Putih, breathtaking acidic lake located in a crater 2430 meters up in the mountains. The colour of water differentiates, depending from sulphur concentration. It can be green, turquoise or even white. During sunny days the lake reflects amazing variety of shades of green, if you happen to be there during cloudy weather, you are likely to see amazing variety of grey. The whole place becomes a mysterious enclave, you feel like almost touching these clouds, which at this point aren’t actually that far away from you. Nearby, there is another lake called Situ Patengan. Surrounded by tea plantations, it looks like being cut out from a fairytale. These hills covered in tea bushes do look amazing. One could wander around for hours, watching people working with great accuracy. It’s very easy to get here because this location is only two hours away from Bandung, city with 6 million inhabitants on west Java.

National Park Karimunjawa is more than worth mentioning, it consists 27 picturesque small islands. Located 100 km north from Java, it makes every newcomer feel like being in an actual paradise. Amazing white sand beaches and crystal clear turquoise waters make it very hard to leave this place.  There’s no better place for people wanting to spend some time on the beach, lying in full sun. Both mangrove forests and jungle add a very unusual, interesting vibe to this place. It’s not a place full of huge commercial hotels, rather a lot of small restaurants with fresh seafood prepared by locals. If you want to calm down and relax, Karimunjawa is a place for you.

Java’s biggest city is also Indonesia’s capital, Jakarta. It’s the second biggest city in the world, overtaken only by Mexico City, the capital of Mexico, which is both amazingly and terrifyingly huge, inhabited by unofficially 35 million people. Jakarta is a house to 32-35 million people, depending if you consider unofficial data or not. This South Asian city is said to be the capital of whole Asia business. It houses many opposites, Asia’s biggest mosque next to impressive cathedral; huge, NYC looking skyscrapers located next to small houses and booths made from plywood only. It is a city full of different museums and exhibitions showing the culture and history of Indonesia. Jakarta is as diverse as the whole country, dominated not by tourists but by the life of local people. Being in Java and not visiting this city would surely be a great loss.