Borobudur – the biggest and the oldest world’s Buddhist templeNovember 15, 2018

Borobudur is located in central Java 40 km away from Yogyokarta. It is very interesting construction based on a rectangle. It was built in three tiers: a pyramidal base with five concentric square terraces, the trunk of a cone with three circular platforms and, at the top, a monumental stupa. Unusual charm and a touch of mystery that flows over is doubled by the tropical rainforest this place of worship is surrounded by. It remains the biggest-ever built temple. Its picturesque localisation, the size and significance made the construction to be the Java’s most recognisable touristic attraction. It can be found on postcards, posters, and leaflets dealing with this part of the world.

It is supposed that Borobudur was built at the turn of 8th and 9th century during the reign of Javanese dynasty Shailendras. However, thesis is based on scientist’s assumptions, who have never found not a single written evidence of that statement. Frankly speaking, no one knows for sure though who had built the construction and what for.  The approximate date of creation was only established by comparison of a bas-relief and the writing that was used then. Yet, only one is known for sure: that amazing building was abandoned right after the works had been finished. The why-question remains undiscovered. Lush rainforest quickly started to absorb the building taking out all its grace and splendour. It gradually became quite a high hill. It is said that only local people had known about the structure, but being mainly Muslim they don’t take much care of a Buddhist temple. With time flowing by  Borobudur was being covered by deep layer of memories, soil and jungle. Standing there, in the middle of the forest, and being covered by time lapse, was not protected from earthquakes and volcanic eruptions that have been haunting Java for ages; as a result it was deteriorating. The end seemed to be sealed soon, as for centuries there was not a single rise of interest in that building.

It wasn’t until 1814 when Java was under British control, that the English governor, Thomas Stamford Raffles, heard stories from local villagers about a mysterious and abandoned structure. He sent his people to investigate and for two months a team of 200 men had to cut down trees, burn vegetation and dig away at the earth to reveal the temple at Borobudur. The British, actually, had wiped the trials, but the Dutch launched more specific research. It was them who had done overall maintenance of the construction.  The works had been finished right before the I World War broke out. The more detailed research was done the more questions arose. Temple uncovered more and more mysteries  and scientists were shocked day by day, which eventually, led to weird theories  many of which were extra- terrestrial based. Because of that, Borobudur became very popular all over the world and more and more tourists wanted to visit it. 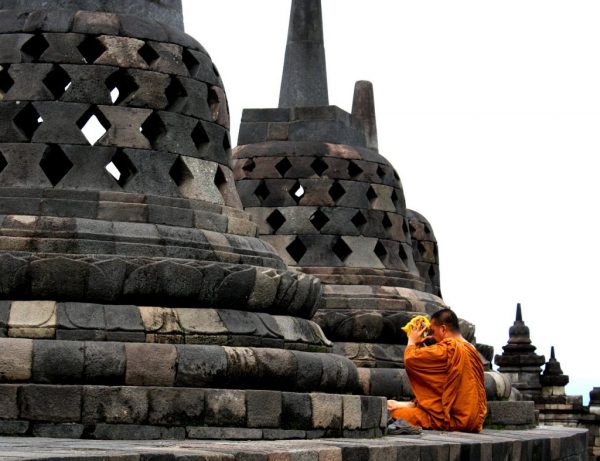 Stupa is made of stone; with height of 36 meters and base of 123 m2.  It is really huge and can be easily compared to the biggest pyramid of ancient Maya World, Structure II, located in Calakmul, Mexico. Architecture of Borobudur delights by its abundant breathtaking patterns. Actually it is a marvel of design, what’s more no mortar combined the solid stone blocks that temple is made of! The structure is like a set of massive interlocking Lego blocks held together without any glue. As we mentioned earlier, the construction was built in three tiers: a pyramidal base with five concentric square terraces, the trunk of a cone with three circular platforms and, at the top, a monumental stupa. There are plenty of stupas in Borobudur, around the terraces, nearby bas-relieves presenting the life of Buddha. The temple is filled with amazing 504 Buddha’s statues. Looking at this temple from above forms the shape of Buddhist mandala. That is to represent the Buddhist cosmology and the nature of mind, the Buddhists’ conception of the universe, as a whole. It was inscribed into UNESCO list in 1991. 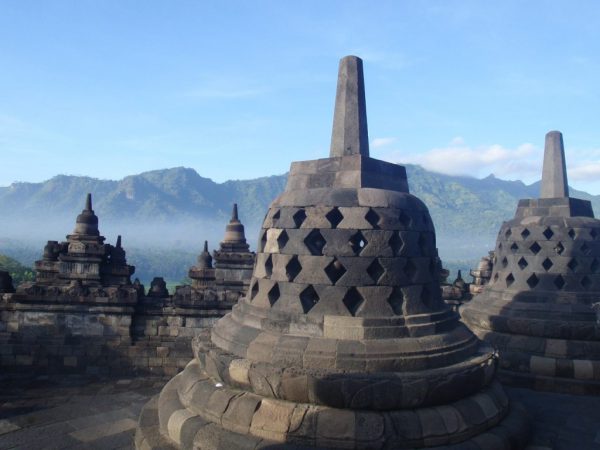 How to get there

Getting to Borobudur from Yogyakarta is simple. There are a few different ways depending on how much time and money you want to spend. The cheapest but least convenient way is to go by public bus. The buses leave from Jombor terminal in the north of Yogyakarta, will take 90 minutes and cost Rp10 000 However, the first bus leaves at 06:00 so you won’t be able to make the sunrise (which is quite special). In the tourist areas of Yogyakarta, quite a few local travel agencies can be found that offer minivan transfers to Borobudur. The cost will probably be around Rp75,000 (US$5.50) for a return trip and there should be departures that get you there in time for the sunrise. This is probably the best option for the budget-minded. A driver/guide may be hired, that takes you to Borobudur in time for the sunrise – and to some of the other main sites you may want to see in the area that day.  This is much more expensive option but is also much more comfortable and convenient and is a good option if you are short of time and want to make the most of your holiday.

Java is one of the most interesting Indonesian islands in terms of monuments, that remain a mystery not only for an ordinary tourist but also for scientists. It is worth being visited with all its secrets and riddles and enigmas that are such fascinating that words couldn’t express it.